There are times in one’s life when a special blend of optimism and procrastination can get you into deep shit. But rarely is it literal shit.

In my unfortunate case, it was. Or at least as close to that particular substance as you can get. Furthermore, it was shit that I made over the course of five wishfully oblivious months.

In brief: compost gone wrong. I had recently moved to Flatbush, Brooklyn and cajoled my housemates into tossing our foodscraps into a trash bin on our roof. I got it, I said, I’ll just take it to the farmer’s market on Sunday where they have a collection program. Alas, wheeling a stinking bucket of rotting food down Church Ave on a Sunday never sounded like a good idea. All the “next week”s turned into months, while the pile of sour garbanzo beans, dead house plants, and sundry other organics grew ever higher.

The weather started to warm. I made the inevitable call: abandon ship. I’ll spare you, my gentle reader, the details of getting all that sludge into trashbags. Suffice it to say, that early spring night was filled with howls of laughter and squealing disbelief. One thing was very clear: the poop was on my hands.

If you were me, you’d be very preoccupied with how and why I could have let such an outrageous thing come to pass. Though the hang-wringing has long ended, I still think this life event warrants extensive appraisal. My analysis so far points to reasons equal parts personal and systemic.

I now live in a Nordic country where it is my great joy and privilege to let the city take my compost away. Living here has granted me the privilege of some perspective where waste management is concerned — perspective that I’ve endeavored to augment further through interviews with various kind and patient people.

But back to the United (sort of) States of America. It is widely understood that the U.S. is too god damn big to govern effectively. What ends up happening is non-profits and other benevolent associations take up work that, under other systems, is the responsibility of the collective. I’ll take the liberty of block quote by Toqueville to illustrate the earliest forms of this very American tendency:

“Americans of all ages, all conditions, all minds constantly unite. Not only do they have commercial and industrial associations in which all take part, but they also have a thousand other kinds: religious, moral, grave, futile, very general and very particular, immense and very small; Americans use associations to give fêtes, to found seminaries, to build inns, to raise churches, to distribute books, to send missionaries to the antipodes; in this manner they create hospitals, prisons, schools.”

The States has always been pretty magical in this way, and it accounts for much of our prolific creativity. But it can also be rather tricky, if not dangerous, to rely on do-gooder people to provide those services that multitudes depend on.

And to get to the heart of the matter: it’s a whole different thing if you’re talking about sanitation. That is a service that categorically must be handled by the collective – by city government. I’m pretty certain that’s why city governments were created in the first place — to dictate where you should poop, where not to throw last night’s chicken carcass, among other important cholera-avoiding regulations.

In the case of my composting disaster, I attempted to take on a role that is better assumed by city government: the proper disposal of waste. Dispose and recycle NYC did, to its great credit given the astounding daily volume of waste, but I couldn’t deem it all that “proper.” It was f*cking difficult to arrange dropping off batteries, lightbulbs, and broken electrical equipment at random dates at random places around the city; recycling in public places (parks, restaurants) was largely non-existent; mattresses and battered TVs clogged sidewalks on a weekly basis. So many missed opportunities. So many neglected obligations.

I thought I could, through the sheer force of my idealism, live more ethically myself. But this is a tall order to take on alone, given the infrastructure, time, and physical effort something like composting requires. But that’s the way it goes, no? You can make things happen in America, but at tremendous personal effort and sacrifice.

Your risk. Your reward. Your disaster. Everyone’s struggling. No one has time for your banana peels.

I moved to Sweden for a lot of different reasons, primary among them love, but also in large part because of a fervid desire to live under a different system — one that takes basic human necessities, the environment, and the balance therein strongly into account when crafting policy.

I went up to a suburb called Hjällbo one rainy afternoon to meet two lovely people from Krettslop och vatten, Göteborg’s water and waste management department. They let me nerd out about my waste management observations and hypotheses, and responded in kind with variations of music to my ears. To paraphrase, they said Göteborg’s waste policy is “to encourage people to buy less and reuse more, but of the stuff that is thrown away, to deal with it responsibly.”

Compost is not called as such here because it is not transferred directly to the soil — it is referred to instead as “food waste”. It is collected from apartment buildings and households in brown paper bags and it’s brought to a processing facility that extracts its methane and heat energy. The mulchy remains of this process creates and awesome fertilizer that is then trucked to large-scale farms.

Extracting value, twice over, from something readily given away by all citizens. It makes so much sense I could cry.

An Injustice to the Mango Peel

So, why is it exactly I want to compost? Why was I moved to such disastrous extremes to do this in New York, and why am I filled with such grateful relief in Göteborg?

Simply put, I like to compost for the same reasons it feels so good to look at this plate of color-grouped gummy bears. Everything in its right place. Order in the universe. 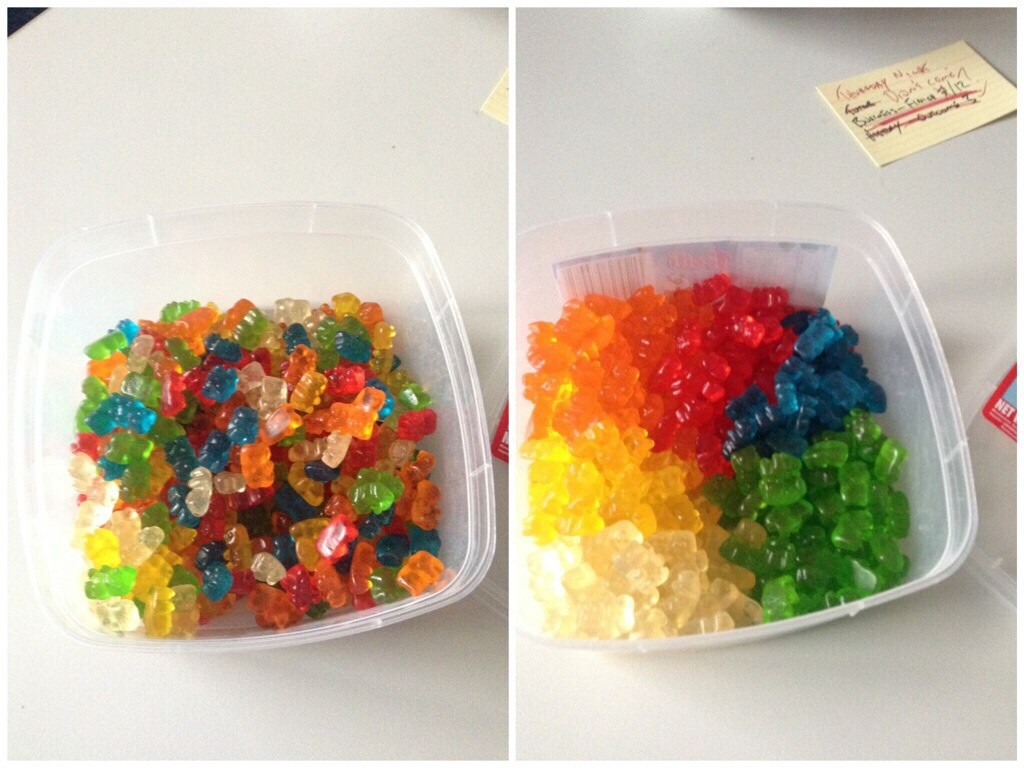 More elaborately put, I remember one specific day in New York, long after our rooftop food-rotting operation was abandoned. It was summer, and as if to taunt me, the lid of our trashcan was broken, its gaping maw open to view the assorted mix of packaging, stir-fry remnants, a cord for some forsaken technological implement, splattered coffee grounds, and handful of fluff balls from a crafting project.

I ate a mango. It was a great one. I went to throw the dripping peels and core away, hesitating a moment as a phantom limb of my mind reached for our composting bucket. I couldn’t help it, my mind was simply sorting like with like.

These mango parts belonged with the eggshells and the broccoli stems. I wanted them to have new life, to return to the probiotic earth from which they came. But no, none of this was possible.

Casting the lot into the trash, I condemned this mango not to death but to a hideous purgatory. To suffocate and rot in a plastic bag on a mountain of garbage, probably in New Jersey somewhere. Stigmatized. Disgusting. Stuck.

Though I failed (demonstrably, epically) in my lack of action on the composting front, I didn’t let my awareness slink away. I held fast to my reasons, even in the absence of solutions. It was pretty agonizing for me, following each bulging bag to its imagined end destination, that silent trash ghetto I would never visit. Would it end up burned, or at the bottom of the ocean? Picked apart by post-apocalyptic human foragers? …No, they probably wouldn’t bother.

And why did I hold fast to this awareness, despite its deleterious impact on my mind?

Well, I wager that to lose your awareness about an important daily aspect of your life — to treat it with denial and disgust — creates a danger of treating other facets of your life and your society in the same manner. There’s a pretty apparent correlation between how a society manages its waste and how it manages its people, especially those people deemed dispensable. An injustice to the mango peel mirrors other injustices, other blindspots.

Besides, the processes of life — of decomposition, of renewal and regrowth — are too active and too insistent to allow organic materials, human beings and food scraps alike, to languish. It is by design and by lazy ignorance that they languish in various forms of entrapment.