One of the assumptions I paraded around with for a good long time was the following: incineration is the future. When I look back on it, I realize the very morbidity of the phrase should have given me pause.

But I was just so taken with the epic and satisfying idea that all the bits and bobs we throw away – that flimsy carton for cherry tomatoes, that plastic knobby thing from your IKEA whatever – would end up in a tremendous inferno, and by some kind of infrastructural magic, would help heat your home to the cozy degree of your choice.

Baby’s first trip to the incinerator

During my second week of living in Göteborg, a friend allowed me to accompany him on his daily rounds recycling industrial byproducts with his massive container-lifting truck. The 4:30am wake up call was a little much for me, so as we approached the incinerator building he nudged me awake, knowing well of my interest.

We entered at the bottom of the massive concrete structure, and slowly drove up and up until we reached an expanse where other trucks were backing up and turning around with quick and easy precision. Hans backed the truck up towards an opening in the concrete wall, edging the back tires to the edge of a precipice. He tilted the container, and with a massive SLAM on the brakes, its contents slid out and fell down into a cavernous concrete chamber.

The dramatic planes of verticality and the harsh yellow industrial lighting in this place reminded me of the “Be Prepared” number in the Lion King, where Scar observes his regiments of hyenas goosestepping far below. Just add some add some speakers bellowing Soviet victory music and you’d have quite an immense and terrifying experience in there.

Despite how cool that all was, I have since learned that straight up burning trash is not the end-all be-all for waste management. It is, rather, an intermediary step on the way to an even better system. Though my nihilistic side (juuust LET IT ALL BURN) was disappointed by this revelation, it makes the utmost sense, and we’ll probably still get to incinerate some things.

Let me describe it to you this way, borrowing an example first presented to me by Thomas Friedman. The evolution of voice communication technology went something like this:

Western countries went through that whole evolution, and now as young Westerners are buying new homes, they’re not installing landlines. It’s no surprise that developing countries — Mozambique, China, etc — are leapfrogging the middle phase and opting for a similar ubiquity of cell phones.

With waste management, the evolution looks something like this:

Sweden is quite proud of its incineration programs, with great reason. They do all kinds of clever things, like take the porcelain that doesn’t burn and turn it into gravel for new roads. And — you can rest easy — the smoke produced is clarified through dry filters and water. Sludge from the latter is poured in abandoned mines. Adorable! I’m telling you, Swedes are good at this stuff.

They’re even now importing trash from other countries. Last I heard they were importing 800,000 tons every year from neighboring countries. All this success has other countries very curious. At our lunch in Hjällbo, the reps from Göteborg’s waste management department told me about a colleague, Paul, on a work tour of the States who was continuously plied with questions about the ins and outs of incineration. Paul encouraged these city government officials to think differently — to leapfrog incineration and fund robust recycling programs instead. I don’t know how that went over, most likely with a lot of polite nodding disguising vague disappointment.

After all, Americans love a bonfire.

So why withhold the satisfaction of an inferno? The answers are various, but this sums it up best: 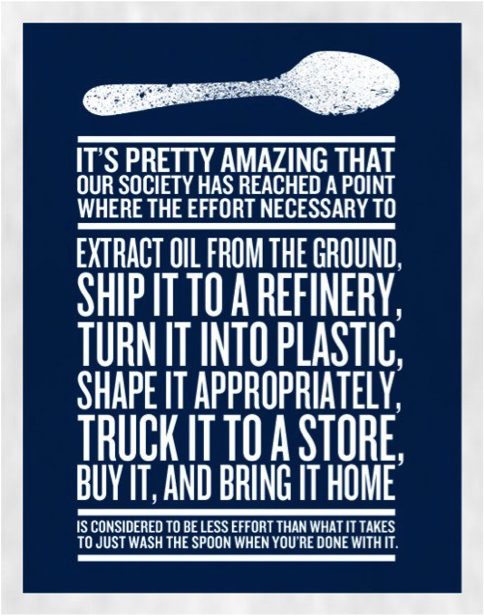 This is definitely taking the long view of things, and it’s difficult for me to fully grasp it for more than 5 seconds at a time. Like a dog standing on its back legs. Or the fact that I am a speck on a rock spinning through the blackness of space.

But again, we can about these things in terms of justice. Landfills constitute a sickening neglect of all kinds of objects that were good to us. Incineration, on the other hand, condemns objects to a shocking finality, a complete and irreversible cessation of existence. And not because they were bad or even broken, but simply because they were tainted by our use of them.

We don’t have to choose between banishment and destruction. There are so many other possibilities that are imbued with ingenuity and new life and common sense.

For instance: wash the damn spoon.